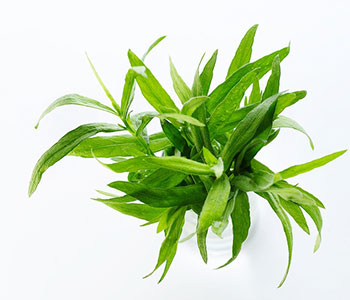 Tarragon, or Artemisia dracunculus, was introduced to Europe in the 13th century by invading Mongols. Unlike so many of our now-commonly used herbs which came to us from the Mediterranean regions, true (or French) tarragon’s origins are far more exotic; it is a native of the remote areas of China (Mongolia) and Russia (Siberia).

The leaves of this herb are glossy, narrow, and spear-shaped with smooth edges, and are used, along with the stems, in cooking. Its flavor is sweet with a hint of anise, and while a potent herb, often used in making flavored vinegars and oils, scrambled eggs with fresh tarragon are “a bit of heaven”. The predominant flavor in béarnaise sauce, tarragon also complements fish, soup and grilled meats. This gardener wouldn’t think of preparing lemon chicken sauté without including fresh chopped tarragon!

A bushy annual, the plant grows to from 1-4 feet tall and likes full sun but will tolerate part shade too. Regular water is necessary, along with a long, warm growing season to produce the most fruit. If your growing season is cool or short, try techniques that will increase the warmth around your plants such as clear plastic mulch.

French tarragon (as opposed to Russian tarragon, which is far more mild and bitter in taste) is a sterile plant, therefore cannot be grown from seeds. When you are creating your herb garden this spring, this is one plant that will need to be purchased. However, if you live in a northern zone, this plant is a perfect indoor grower. In late summer, pot up your plants, cutting the branches down nearly to soil level. Place a stake (or popsicle stick) in the potted plant, put the pot in a plastic bag, tie the top with a twisty tie and place in the refrigerator to encourage a short period of dormancy. Upon the arrival of fall, remove the plastic, place in a sunny window, and watch it grow until ready for transplantation outside into well-drained soil beneath full sun. To ensure fresh tarragon all year round, chop the leaves, place them in small plastic freezer bags, and press to remove excess air before sealing and freezing.

The ancient Greeks would chew on the fresh leaves for toothache relief. Medieval physicians prescribed it for venomous snake bites. Relatively new to the cook wise enough to incorporate fresh herbs into their dishes, it was believed to have been introduced to Europe by the Tudor family who planted it in their gardens. Tarragon is widely used to stimulate the appetite (while relieving resultant flatulence), as a cure for rheumatism, and as a mild diuretic.

The Chippewa used the root of the tarragon plant to assist in difficult deliveries; afterwards it was used in a bath to strengthen the child. The Shuswap also used tarragon as a gynecological aid during childbirth, along with burning it to repel mosquitoes. The Ramah Navajo developed a lotion that was an aid in healing cuts.

This marvelous herb (which originated in the Far East, was brought to Europe a mere five hundred years ago, and embraced by Canadian and Native American Indian tribes as well as by French chefs), will prove to be an aromatic augmentation to your herb garden.